Kids still love Star Wars, and now there's a girl Jedi for them to love! 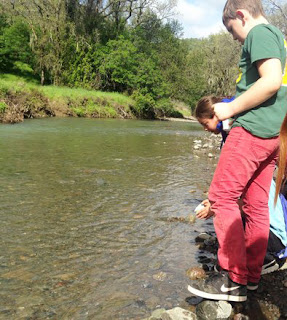 I recently got to watch a class of fourth-graders release tiny steelhead trout they had raised from eggs into a creek.
“May the Force be with you,” many of them said to the fish, hoping it would help them make it to the ocean, then eventually come back to spawn.
That was cool.
As someone who remembers seeing the first batch of Star Wars movies when I was their age, I love that kids still love Star Wars.
And I love even more that girls now have a girl Jedi to admire.
I remember playing with Star Wars action figures with my best friend and having intense arguments about whose favorite character was the hero, Luke Skywalker or Han Solo. I argued for Luke, she argued for Han.
But if the action figures we were playing were from Star Wars: The Force Awakens, we wouldn’t have been fighting over who the hero was. We’d fight over who got to play her.
Posted by Justine Frederiksen at 3:45 PM No comments: