Sweet, silly and sexy notes my husband left me with dinner: "Make a salad!”

When we were living in Seattle and my husband had gone back to school, there were many days when we hardly saw each other. In the morning he headed off to classes and I hopped on a ferry to my job across Puget Sound. By the time I got home at night my husband was gone again to his job, but not before leaving me dinner and a note with a funny drawing.

Even cooler? I recently found a stack of those notes I saved. I find them all funny and endearing, but did edit a bad word out of the first one. I also need to warn sensitive readers about the sexually-suggestive placement of a vegetable in the last one.

I don't know why he didn't want me to make soup. I think he might have been referring to how I liked to build my dinner around instant ramen, which is usually packed with sodium and little nutrients.

(For those who aren't fans of the TV show Seinfeld, this is a reference to a stern character who sold delicious soups only to those who complied with his exacting demands.) 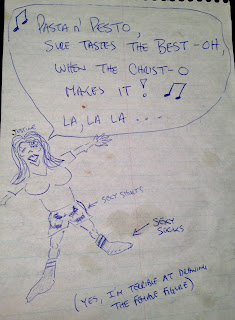 This is supposed to be me, in my "hanging around the house" outfit, singing about pesto. I think I'm wearing the boxer shorts I had with cats on them. I don't think this drawing looks like me at all, but he's right about his pesto. It's delicious. 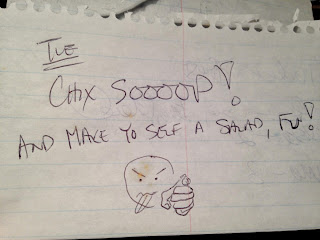 Everyone else, I give you: 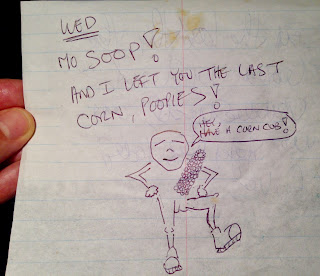 Posted by Justine Frederiksen at 5:39 PM No comments:

Email ThisBlogThis!Share to TwitterShare to FacebookShare to Pinterest
Labels: love notes, notes from a marriage, notes from my husband

My mother helped protect Snowy Plovers. And one morning, she let me hold one.

My mother loved birds. Especially the scrappy Snowy Plover, which nearly disappeared from California beaches due to human invasion. When some of the small shorebirds were found surviving on a secluded Santa Cruz County beach decades ago, my mother spent most weekends helping protect them.

I  didn't always think it was cool. As a kid I hated getting dragged out of bed before dawn to drive an hour to Wilder Ranch, then walk several miles under bridges and through crops just to get to the sand that usually never had a Plover on it by the time I got there. So I always had to be bribed with a donut at Ferrell's afterward. But one morning I got an even better reward: After finding a nest, my mother gathered up the mother to be banded. And let me hold her.

That was super cool.

After learning from a local biologist how to safely trap and band the birds, my mother worked for several years on the Snowy Plover Survey, which had volunteers like her counting birds, monitoring nests and tracking human disturbance.

To catch the bird after spotting her nest, my mother laid out three long pieces of what looked like thick chicken wire with very small holes. On each piece, she had tied dozens of little fishing line lassos.

With the traps forming a triangle around the nest, we hid behind a dune. When the bird came back and walked over the traps to its nest, one of the lassos caught its leg. The bird panicked, hopping and tugging at the line until my mother gently scooped it up and cut the line.

Then she held out the bird to me. “Here, you can hold her. Be very gentle.” I wrapped my hands around the bird’s squirming body, trying not to squeeze her too hard or let her go. I was surprised at how warm she felt, and how fast her heart was beating.

We put the bird head first into a tube to secure her, then my mother hooked a scale onto her leg. After recording the weight and length, she prepared for the trickiest part — putting on the band. While the bird waited in the tube, her mother chose the proper color and readied the tiny bracelet in her pliers. She steadied the bird’s leg, then quickly snapped the band in place.
Two minutes later, we released the bird and she hopped off, shaking her leg to try and kick off the band. “Let’s go,” my mother said. “She’ll never go back to the nest with us here.”

A few years later my mother died on a trip to see a very rare bird spotted a few hours south of us. As a family we decided to cremate her, then scatter her ashes with the birds she loved, after getting permission to leave her remains on a state beach.

We also needed a park ranger to escort us to the sand, and at first I resented having this stranger joining all her loved ones as we said goodbye. But when I realized I had carried the box of ashes all the way to the beach with no way to open it, I became very grateful for the ranger because he had a knife to cut both the cardboard and the thick plastic bag for me.

A few years later I got a job with the California State Parks, where I worked with a ranger who used to patrol Wilder Ranch. She remembered having to ask my father to leave the park after closing more than once. “He showed me the permit you guys had gotten for her ashes,” she said. “He seemed to be having a hard time letting go.”

“I lost my best friend,” he said of my mother, who died on their 20th wedding anniversary. But luckily, knowing she would be going birding on their actual anniversary, they had gone away to celebrate the weekend before.

So when my father died nearly 30 years after my mother in 2014, I had his ashes brought back to California from Indiana so I could leave him at her beach as well. We never talked about it, but I knew that was where he wanted to be.

Posted by Justine Frederiksen at 12:04 PM No comments:

In tiny notebooks, my grandmother wrote down each day what time she woke up, where she ate breakfast, any movie she went to see, what mail and phone calls she received, then what she read and watched on TV before bed.

In 1996, she was 80-years-old and living alone in a mobile home park in Santa Cruz, Calif. But I wouldn't describe her as lonely; she was an extremely independent and persnickety woman whom I never knew to live with another person or even a pet. (I wrote more about her life in an earlier post.)