Mom wouldn’t buy him a gumball machine, so boy makes one out of Legos

Six-year-old Harvey wanted a gumball machine, but his mom didn’t want to buy it.
So the boy got out his Legos and made one instead.
That was cool.
“It took him an hour, and it worked,” mom Sarah said of the machine Harvey built. “It was simple and brilliantly done. But then he went on to redesign and make two more the next day. Then he made an egg beater.”
“He is smart in ways I have never been, and I love that so much,” she said of the boy whose father is a civil engineer, though she admitted that Harvey’s impulses can also be “irritating, because he often wants to do things he shouldn't be doing. Full of the spirit of life, he stubbornly keeps trying to get what he wants — always, selfishly himself, no apologies.”
And as exhausting as it may be to keep up with him, Sarah above all admires his inexhaustible determination to bring his wishes to life. “I am very lucky that I get to be with Harvey,” she said.
Even cooler?
Harvey was born on the day my mother died, turning what I've called "death day" for decades into his birthday. In that way, he has become my spirit animal.
See Harvey with his creation:

Posted by Justine Frederiksen at 10:47 AM No comments:

On our first road trip together, we had the “Scones Incident.”
“Could you get me a tall coffee?” my husband asked that morning outside a Starbucks in Barstow, Calif.
But when I came back to the car, I was holding only my coffee.
“Where’s mine?” he said.
“Oh.” I held up the bag in my other hand. “I got distracted by the pastry case. There were scones!”
He shook his head and laughed.
That was cool.
Because two decades and countless miles later, I’m still getting distracted by scones, only now they are Historical Landmark signs.
“Wait, ‘World’s First Long-Distance Telephone Line?! Can we check it out, please?!” I cried while we were heading down Highway 20 near Grass Valley earlier this year. I had no idea there was such a thing in Northern California, and now I had to see it.
A bit miraculously, my husband agreed to head up Pleasant Valley Road to French Corral, the tiny town where the telephone line had been strung. But although there’s really nothing else in French Corral except a few houses and a cool, barn-like Wells Fargo building, we could not find that telephone line marker, despite driving by it twice that first day.
I figured I’d never get to see that telephone line, but on our way home from Grass Valley the next day, we passed the sign again and my husband sighed. “Do you want to try again?”
I sure did! And this time we crawled down that road once we reached French Corral, our eyes peeled, and finally I spotted the marker, barely bigger than a mailbox with no sign next to it. 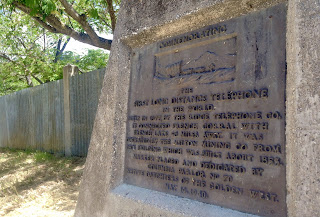 But it is right next to someone's driveway, which is probably why it’s so hard to find. Maybe there used to be a sign, but whoever lives there took it down, sick of people like me looking for that “dang marker,” pictured at right.
Finding that historical landmark took two days and 40 extra miles on narrow, winding mountain roads, but I was so happy to see it, and even happier that my husband had offered to drive me there.
Because years earlier he threw a fit when I wanted to make another side trip. We had stopped at a park to pee the dog on the last leg of another road trip when I saw a short trail of Donner Party historical sites, but my husband did not want to wait for me to hike it. Granted, he had just spent the last two weeks driving us to Yellowstone National Park and back through snow and the dog’s explosive diarrhea, and he just wanted to get home. But the trail would just take another 15 minutes. And when would I be back there again?
I did walk that trail, but my husband wasn’t happy about it.
So it was that much cooler when he offered, twice, to try and find another historical site. I guess he finally has completely given into “Scones.” 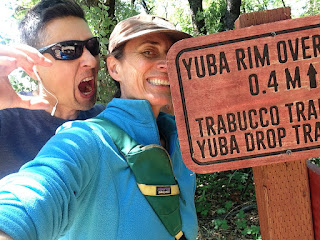 Posted by Justine Frederiksen at 10:12 AM No comments:

In tiny notebooks, my grandmother wrote down each day what time she woke up, where she ate breakfast, any movie she went to see, what mail and phone calls she received, then what she read and watched on TV before bed.

In 1996, she turned 81 while living alone in a mobile home park in Santa Cruz, Calif. But I wouldn't describe her as lonely; she was an extremely independent and persnickety woman whom I never knew to live with another person or even a pet. (I wrote more about her life in an earlier post.)