I kept my mother's binoculars after the crash. Thirty years later, her friend still recognized them. 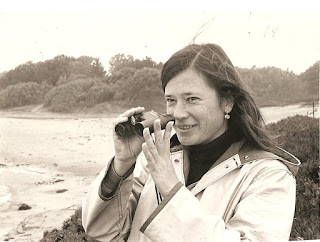 I kept my mother's binoculars after the crash, though at the time I was still a teenager who resented the passion I blamed for her death. And I was very glad to have them when I finally saw one of her birding pals again 30 years later and her binoculars brought him to tears.

Cool not because I like to make people sad. Cool because I knew how much he missed my mother, too.
It was healing for me to learn what bird they were all looking for that day, a Spotted Redshank. And that he still agonized over how my mother had been riding with the newest and youngest member of their bird club because his car was full.
One of the few things that can truly ease the grief of losing someone is being with another person who feels their absence. They understand that no matter how long it has been, no matter how fine you look, you are still among the walking wounded.
Losing a loved one in a sudden event feels like someone ripped out your lungs and told you to breathe a different way.
You find a way to adapt, but you never forget how it felt to be whole. And the pain never really goes away, though you soon stop talking about it, because the only thing worse than feeling pain is having to explain it.
But you don’t have to say anything to someone with the same scar. You don’t have to paint your mother in their head: she already lives there.
As you both picture her, your pain feels lighter and her image grows brighter. Maybe it can even grow bright enough for her to see it, and know we still think of her.

Of course, it was even cooler that my grandfather saved the binoculars for me in the first place.
They were damaged in the crash that killed her, but my grandfather retrieved them and had them repaired before returning them to me.
I don’t keep them tucked under my driver’s seat as she did, so she could whip them out whenever she saw anything other than a turkey vulture flying overhead. They now sit on a shelf where I can look at them and smile, but sometimes I do take them out to look for birds. And when I see one, I like to think that she can see it, too.
And maybe some day I will see a Spotted Redshank for her.
Posted by Justine Frederiksen at 3:23 PM No comments: