I found a time machine on the Mendocino County line: The Gualala River

Last summer I went camping with family and stepped back in time.
With no Internet or cell service at our campground, we had no screens to look at. So when I walked to the river, the youngest camper in our group, a nine-year-old girl, followed me down to the water. I watched the birds, she dipped in her toes, and as we stood there quietly, not doing much of anything but enjoying being outside, I floated back to 1979.
That was cool.
In 1979 I would have been that nine-year-old girl, and that summer I would have gone to Yosemite with my mother and sister for our annual camping trip. Most days camping my mother took off birding, leaving my sister to take me fishing at the creek. Bored by sitting, I would walk through the water, loving to watch the tiny fish swim past my feet.
The Internet and cell phones hadn't been invented when I was a kid, and I'm so grateful. I'm even grateful that I grew up without a television, though I hated it at the time. 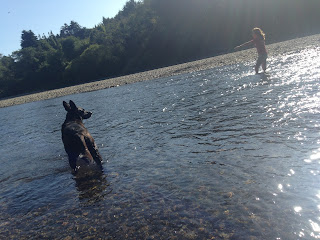 But now I can appreciate being forced to become bored and learn how to entertain myself with my surroundings. Lie in the grass and watch the bugs on the ground, the birds and clouds in the sky. Hold races with the leaves floating down the rain gutter.
And I loved how 40 years later I could have that again with another kid: Spend an afternoon just walking through the water and watching whatever nature sent floating by.
Posted by Justine Frederiksen at 1:35 PM No comments:

Email ThisBlogThis!Share to TwitterShare to FacebookShare to Pinterest
Labels: A trip back in time, Camping like it was 1979, Mendocino County, no cell service, no Internet, no screens

Every day my grandmother wrote down what time she woke up, where she ate breakfast, what movie she went to see, what mail and phone calls she received, then what she read and watched on TV before going to sleep.

In 1995, she was 79 years old and living alone in a mobile home park in Santa Cruz, Calif., but I wouldn't describe her as lonely; she was an extremely independent and persnickety woman whom I never knew to live with another person or even a pet.
In her late 70s she was still traveling alone, corresponding with people across the globe she befriended on her trips, and always keeping up with current events. (I wrote more about her life in an earlier post.)