Poem: The weed growing above the freeway 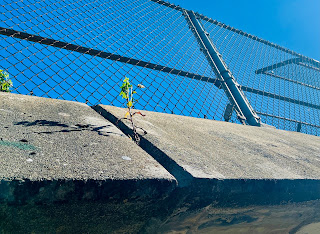 When the worry and dread

take over my head,

I go visit the weed

Growing above the freeway.

And I tell it my troubles,

which are always different

yet always the same,

about how the world is dying,

faster toward their doom,

on the freeway below.

And always I ask the weed

how it found that crack in the gray

to grow so green and serene

and stand so tall

And always it says nothing,

Still I always feel better after our chat,

and begin searching anew for my way

to grow green and serene among the gray,

growing above the freeway.

Posted by Justine Frederiksen at 3:35 PM No comments:

Email ThisBlogThis!Share to TwitterShare to FacebookShare to Pinterest
Labels: hope, how to find hope, Poem, weeds

On special occasions I like to eat hot dogs. No fancy food in expensive restaurants for me, please. And no ketchup, either. Just a hot dog with plenty of mustard is all I need.

So that is what we brought to a house we rented on my birthday one year. But the house that had nothing to cook with. A stove, but no pans. A microwave, but no bowls. No grill or fireplace, either.

It seemed like I wouldn’t get to celebrate with hot dogs after all. Until my husband finally found a way to cook them: boiling the hot dogs in the microwave with the only bowl we could put in there — the dog’s water dish.

That was super cool.

Posted by Justine Frederiksen at 9:36 PM No comments:

Email ThisBlogThis!Share to TwitterShare to FacebookShare to Pinterest
Labels: Best hot dogs ever