How my mother bought me a wedding bouquet, even though she died before I got married

While exploring Europe with her friends, my mother met a man in a bar one night who helped her request a song. When they met again in Greece, she ditched her friends to hitchhike with him through Turkey, and by the time they reached Syria she had fallen in love with the "beautiful, quiet" Danish man who wore a kilt and spoke English with a Scottish accent. Before she brought him home with her to Los Angeles, they were married in a civil ceremony in Paisley, Scotland, in 1965 when she was 21 and he 27.
That was cool.
Decades later when I was ready to get hitched, I longed to get married in Paisley, too. Since my parents couldn't be there in person (my mother had died when I was a teen and my father couldn't attend) I thought the best way to have them with me was to get married where they did. The idea was a bit crazy and would be hard to make happen, but my husband agreed to the plan and off we went.
Our wedding party was small, with one of the planned witnesses our friend named Jim. Turns out my parents also had a witness named Jim, a Scottish man my father had traveled with for several years before meeting my mother. Since Jim lived in Paisley, my parents headed there to get married so Jim could attend.
Another person in our wedding party was Heather, one of my husband's cousins. The day of the ceremony, Heather woke up early with a plan to get me a wedding bouquet, walking to the nearest shop so she could surprise me with flowers I didn't know I wanted until she handed them to me.
And it turns out that without even trying, she had made me a bouquet that looked almost exactly like the one my mother had on her wedding day.
That was super cool.
But we didn't realize that until this year, when I posted my parents' wedding photo for another blog post.
Thirteen years later, while looking at photos from both weddings, it struck me how much the bouquets looked alike. I asked Heather if she had done that on purpose, as I had brought my mother's wedding photo with me, so she could have seen her bouquet.
Heather said she hadn't meant to create a similar bouquet, but definitely noticed how much they looked alike when seeing my mother's flowers again. "And I got a little teary-eyed," she said. "I actually think it's cooler that it just happened that way. It's a small town, maybe it was the same shop where she got hers."
Or maybe my mother was there with Heather as she picked out the flowers, then shaped the bouquet in her hotel room before the ceremony. I like thinking she was.
Posted by Justine Frederiksen at 12:50 PM 2 comments:

Before
I couldn't see inside
Only shiny metal on black tires
Steel wings and a roar overhead.
After
I can't see anything but the faces
And laughs and smiles
Bundles of life
Belted to buckets of steel
rushing to loves and dinners and holidays and homes
suspended in the seconds before the crash.
Now 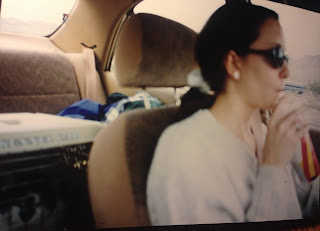 Every time the door closes
I soak up the echoes
And squeeze them tight
So I'll still have something
When they don't come back.
Posted by Justine Frederiksen at 11:59 AM No comments:

Email ThisBlogThis!Share to TwitterShare to FacebookShare to Pinterest
Labels: Poem, poem inspired by 9/11

In tiny notebooks, my grandmother wrote down each day what time she woke up, where she ate breakfast, any movie she went to see, what mail and phone calls she received, then what she read and watched on TV before bed.
In 1996, she was 80-years-old and living alone in a mobile home park in Santa Cruz, Calif. But I wouldn't describe her as lonely; she was an extremely independent and persnickety woman whom I never knew to live with another person or even a pet. (I wrote more about her life in an earlier post.)

Posted by Justine Frederiksen at 4:20 PM No comments: