Road trips in my family's van: They were cramped, boring, and created some of my favorite memories

Much of my childhood was spent in a van, especially the 1968 Chevy that my parents drove across California, Nevada and Arizona.

I remember feeling trapped and bored on those trips, spending countless hours just staring at the globe compass on the dashboard and willing its dial to stop wobbling. Because if the compass was still, that meant the van had stopped and I could finally go outside again.

But all that time we spent crammed together in that van also created some of my favorite memories with my family. Like when my sister and I put on shows for the other cars on the highway.

Since this was the 1970s and we didn't all carry interactive screens everywhere, my sister and I entertained ourselves by reading, drawing or playing with toys in the van. Until my father caught us and exclaimed, "Look out the window! Who knows if you'll ever be driving by here again."

So I looked out at the landscape, but not for long. Soon I was watching the other cars, with all the other bored people inside, and decided to entertain us all.

I went to the back windows and opened my case, and my sister joined me. First we showed them all our toys, including what we made with our Legos. Then if the car was still behind us and the people seemed to be enjoying our show, we wrote out greetings on pieces of paper. And if I was sure my mother wasn't watching, I'd put pairs of underwear on my head to make them laugh.

I love imagining what these people thought, watching these girls waving at them from the back windows of their van, especially the one with the panties on her wild blond hair.

But my absolute favorite memories of that van were the times I got to crawl on top of it, into the wooden box my father built on its roof for extra storage space.

The box ran the length of the van and was several inches in height, so it could easily fit our whole family, let alone kid me. I was constantly begging my mother to let me ride up top, but she always said it was too dangerous for me to be up there unless the van was parked. Except for one trip to Yosemite, when she finally relented and said when my father was driving slowly inside the park near a famous redwood grove, I could ride up top.

I still remember how it felt to be lying there, looking up at the sky full of redwood trees and thinking I had the coolest dad in the world, who was always building cool things and letting us do fun things in the van.

(Another cool memory: My father and I listened to "The Catch" together on the radio while in his van.)

Even when we weren't on road trips, he made the van our playground. He'd drive off with the sliding door open, forcing us to chase after it and jump in if we didn't want to be left behind. Once inside, he let us lie on our bellies above the holes in the floor so we could watch the road fly by underneath. Even though I saw mostly just a blur of asphalt, I found it fascinating, and never considered that I could easily lose an eye if a big enough rock came flying up to hit it.

Because I always felt safe in that van. Even when we were driving in the middle of the night and I woke up in my sleeping bag with no idea where we were. But I didn't need to know, because my parents did. So I would just watch the trees and telephone poles flying overhead until I fell asleep again, knowing that it didn't matter where we were going, just that we were together.

And to this day, nearly 50 years later, my favorite vacations are in cars, especially the long road trips my husband and I take with the dog. Just me and my family on the road, creating new favorite memories.

Another cool tidbit: I recently learned that my mother's love for camping and road trips was nurtured by her own childhood, as my grandmother took her on many such adventures, including one epic journey to three national parks for my grandmother's 40th birthday.

*A little more on the photos in this post: They were taken by my 11-year-old cousin Kirsten, who was visiting the United States from Denmark for the first time with our grandfather in 1975, whom we called fa-fa, which means "father's father." Their trip is what inspired my father to build the box on the van's roof, as he knew we would need more room for suitcases and such. I had never seen her pictures from that trip until she sent them to me this week, and I am so grateful that she took them, and saved them all these years. That was very cool!

Posted by Justine Frederiksen at 7:15 PM No comments:

In tiny notebooks, my grandmother wrote each day when she woke, where she ate breakfast, any movie she went to see, any mail and calls she received, then what she read and watched on TV before bed, where she seemed to struggle to sleep most nights.
In 1997, she turned 82 while living alone in a mobile home park in Santa Cruz, Calif., but I wouldn't describe her as lonely. She was an extremely independent and persnickety woman whom I never knew to live with another person or even a pet. (I wrote more about her life in an earlier post.)
Close to her home was the famous surfing spot called Pleasure Point, and she loved walking on the cliffs above the ocean and watching the surfers. When she died at 97 in 2013, I took her ashes to those waves with a friend of hers and we each dropped some at the sand. A moment after I dropped mine, a surfer emerged from the water where I stood.
That was cool. 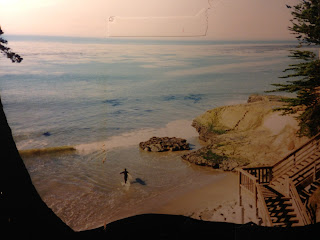 How a chance encounter at the dog park led to a 10-year love affair — for my dog!

I had no intention of going into the dog park the day we met Simon. Still a brand-new dog owner who was nervous about everything, I was especially afraid of letting my completely untrained, 60-pound tornado off her leash anywhere in public, even inside a securely fenced area.

But as I tried to walk past the park, a sweet-looking dog ran up to the fence. Though he was very interested in meeting my dog, and she was just as interested in meeting him, I tried to remain outside. I told his owner all my fears, but she just smiled them off, assuring me everything would be fine — and something about Noreen convinced me to take Ripley inside to play with Simon.

That was not only cool, but one of the coolest things ever. Because we all fell in love that day: The dogs with each other, the humans with watching them play.

Immediately, Simon and Ripley began wrestling and chasing each other like they were already the best of friends. And they stayed the best of friends for the next 10 years.
They bonded so well because they were both about a year old, and both herding dog mixes: Ripley a blend of German and McNab Shepherds, and Simon a cattle dog mixed with lab.
Herding dogs can play fast and rough, often intimidating other dogs who don’t like to be chased, corralled or even nipped, but Simon and Ripley got along so well that his owner Noreen and I began meeting regularly at the dog park so they could play.
Soon the dogs invented their own game we called The Ball Game. Simon would lie down with a tennis ball in his mouth, then Ripley would lie down next to him and try to pull the ball out. Simon would growl playfully, his stumpy tail wagging, as the dogs pulled on the ball, their heads bobbing back and forth. As the game progressed, Simon would lie on his back to give Ripley better access to the ball, while still keeping it firmly in his mouth.

When Noreen and I learned we lived only two blocks from each other, we started hosting play dates in our back yards, where the dogs were free to run, wrestle and play the Ball Game without interruption from other dogs. Sometimes Ripley would get the ball out, but most of the time the dogs were happy just to lie there together, “making out,” for as long as us humans wanted to watch.

Over the next ten years, Noreen and I walked our dogs together many times a week, so Simon and Ripley enjoyed hundreds of evening strolls together. We also traded pet-sitting duties, with her making many a road trip possible for my husband and me because of her volunteering to check on our cats. And those are just some of the countless good things created by that first play session in November of 2012. 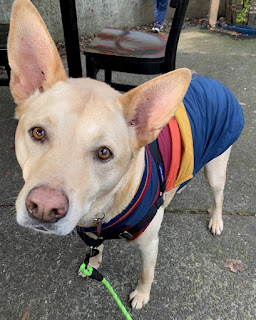 Sad-but-happy update: I’m sad to report that Noreen died in early 2022 of cancer, but I am also happy to report that her daughter quickly found Simon another home. One of her friends in Oregon has a small child, and wanted to adopt an older dog like Simon who was calm and already trained.

I miss both Noreen and Simon, and am very sad that Ripley and Simon don’t get to see each other anymore. But I am so grateful for all the time we got to spend together, and cannot thank Noreen enough for convincing me to go into the dog park that first day.

Posted by Justine Frederiksen at 5:39 PM No comments: