Before Google we had big books called encylopedias. And I carried one to school once to show my teacher I was right about bears. 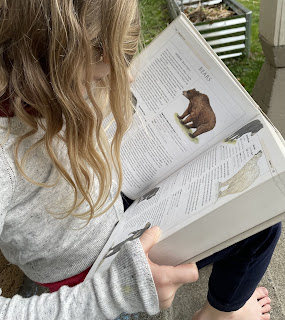 In the Third Grade I got a quiz back with one answer marked wrong. I could have just accepted the solid 90-percent I earned, but I knew all my answers were correct. When I told this to my teacher and she wouldn't change my grade, my mother sent me to school the next day with our huge animal encyclopedia to prove I was right.

After these lessons we had a quiz that asked 10 questions, including which of these categories bears were in. I had known for years what bears eat because my mother took us camping every summer in Yosemite National Park, where the Rangers constantly warned us to never leave anything edible in our tents since bears loved all the same snacks we did, even candy. So I circled “omnivores” for bears.

But my teacher marked that answer wrong, giving me only 9 points out of 10. When I told her that I should have gotten them all right because bears were, in fact, omnivores, she showed me her answer key, which identified bears as carnivores.

When I told my mother what happened, she was livid. And had me to take our huge animal encyclopedia to school the next day to show my teacher that bears were, in fact, omnivores.

So I carried that bulky book all the way to class and up to my teacher’s desk. She read the page, smiled, and corrected my score to a perfect 10 out of 10.

I remember feeling proud of myself and my newly earned 100-percent as I walked back to my desk, but even more proud of my mother. Proud of how smart she was, and proud that she cared just as much about my schoolwork as I did. Of course, I felt a little less proud of earning my one missed point that afternoon as I walked that heavy book the mile back home, but I still loved my mother for having me take it to class, creating one of my favorite memories of both her and of elementary school.

A note on the photos for this post: They were taken by my friend Denise, who asked one of her granddaughters to pose for them with the big animal encyclopedia her father grew up with. Her granddaughter is about the age I was at the time, and has the same color hair I did, so she was the perfect model, and I am very grateful for their help.

Posted by Justine Frederiksen at 9:43 PM No comments:

Poem: The Cat in My Lap

I had only five minutes more of electricity

But the cat wanted a lap, you see.

So I didn’t dash about

Using all the power I could before it went out. 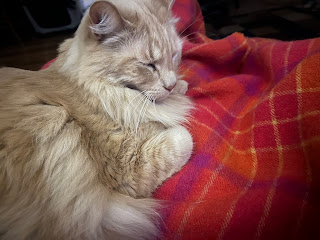 Posted by Justine Frederiksen at 6:04 PM No comments:

Email ThisBlogThis!Share to TwitterShare to FacebookShare to Pinterest
Labels: Poem

Poem: The Tall Ones

I visit the tall ones to feel small.

To hear them laugh at my problems.

And hand them to the sky.

Posted by Justine Frederiksen at 8:04 AM No comments: