She wasn't driving the car my mother died in. But she helped me forgive the boy who was.

In the park I visit most days there is a plaque for two teens killed in a car crash. I like reading it, not only because I remember writing about the crash for the local newspaper, but because I lost a loved one in a crash. Seeing the touching words written to those kids gives me comfort. 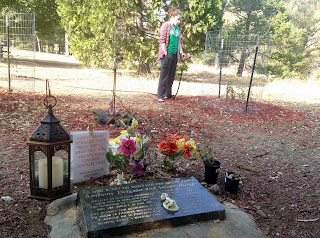 One day I saw a young woman watering the trees planted near the memorial.
"Did you know the kids who died?" I asked, my reporter's hat on my head. "Are you a family member?"
She barely hesitated before saying, "I caused the accident."
Her honesty knocked my reporter's hat off and I was suddenly 15 again, muttering about how my mother died in a car with a teenager behind the wheel.

But when the woman began explaining that she was waiting to hear back from medical schools because her recovery from the crash made her want to be a doctor, I put my reporter hat back on and asked if I could write about her life since that day. And she agreed.

Erica said she doesn't remember turning left in front of that pick-up truck, only waking up to a horrible scene inside her car and a man's face looking through her crumpled windshield. Next she remembers a woman standing over her hospital bed, calmly promising, "As long as you're here with me, I'll be here with you."

Now Erica is in medical school, studying to be an osteopath like that woman who held her hand while they waited for Erica's mother to drive to the hospital from hours away. But first she had to work through the guilt and blame, which came mostly from herself.

Having Erica be so honest about how she blamed herself for the crash, even when others wouldn't, and struggled to live with the guilt, shame and regret, I realized how much I had wanted to hear those words from the 17-year-old who killed my mother by driving into the path of a semi-truck.

I knew nothing of that boy until I saw him in the hospital, covered in bandages and attached to beeping machines. He was severely injured but still alive, and I remember closing my eyes at the window outside his room and imagining those beeps were keeping my mother alive instead. Since the grill of the truck had stopped in her lap, had she survived she never would have walked again. But she could still talk, and I could talk to her.

Weeks later I saw the boy again at his house, my father and I sitting in his living room while his mother hovered around nervously. I don't remember what was said, only the questions in my head that were never asked: "Why was my mother in your car? Did you guys find the bird you were looking for? Did she see the truck before it hit you? Did she know she was going to die? Did she scream?"

Then I never saw or heard from him again, this boy who changed my life forever. And I never really thought about him, either. Until I met Erica. Because writing about her struggles to heal helped me heal a wound I never knew I had.

I don't remember ever feeling angry at the boy or wishing bad things would happen to him. But I know now that I want him to feel bad. I want to know that he has also struggled to forgive himself for the part he played in the crash (in his report, the crash investigator noted that the boy's actions could be considered "vehicular homicide") and that he has hoped over the years for our forgiveness, too. And that while he could never give my mother back her life, never give my father back his wife, and never give my sister and me back our mother, he can certainly vow to help others the way Erica has vowed to.

So now when I think of him, I try not to think of him breathing through all those beeping machines while my mother lies on her silent slab. I try to imagine him coming up to another patient and helping them heal as Erica wants to do.

And I thank her for that, because she already helped me heal. I may never hear the words I want from that driver, but I heard them from Erica. And that is enough.

My Grandmother's Journals: Life of a frugal, independent woman at 79. January, 1995

Every day my grandmother wrote down what time she woke up, where she ate breakfast (at places like McDonald's, Burger King and Kmart) what movie she went to see, what mail and phone calls she received, what she read and what she watched on TV before going to sleep.

In 1995, she was 79 years old and living alone in a mobile home park. I wouldn't describe her as lonely; she was an extremely independent, persnickety woman whom I never knew to live with another person or even a pet. A bookkeeper for much of her life, she was very frugal and took herself on trips to China, Russia, Singapore and to Paris, her favorite city, numerous times. In fact, she visited Paris twice in 1995, first in April and again in December with me.

A short walk from her home in Santa Cruz, Calif., was the famous surfing spot called Pleasure Point, and one of her favorite things to do was to walk along the cliffs above the water and watch the surfers. When she died at 97 in 2013, I took her ashes to Pleasure Point with a friend of hers and we each put some in the ocean. Seconds after I dropped mine, a surfer emerged from the water where I stood.

In January of 1995, she was watching the O.J. Simpson Trial and studying French to prepare for her next trip to France. 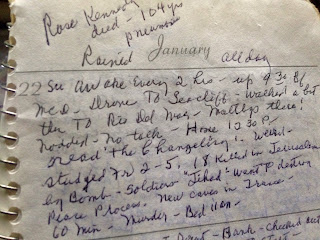 Tuesday, Jan. 3, 1995
Up at 8:15 a.m., breakfast at Kmart. Went to Long's for photos, post office for stamps. Bought Coffee Cat t-shirt {that she later mails to me.}
In mail a card from Linda, new brochure for tour.
Phone call at 4:50 p.m., man asked for Yvonne {Her first name}, but then hung up! Accent, cultured?
Took Xmas lites down, cut cards for mailing.
Watched Fraiser, Home Improvement, NYPD. Couldn't sleep.

Wednesday, Jan. 25, 1995
No rain. Up 8:40. Library, took Changeling back. Went to The Buttery.
Judge Ito {she was watching the O.J. Simpson trial} okayed camera in courtroom but under conditions. Johnny Cochran glib. Certainly knows how to speak to Afro-Am's.
Letter from Mimi.
Trial, then CNN w/angry exchange about Defense not reporting discovery! J. Cochran is slick pimp.
Bed 12 a.m.

Sunday, Jan. 29, 1995
Up 9:30. Breakfast at McDonald's.
Home, read, studied French, watched Super Bowl. Not too bad, rooted for San Diego. Over at 6 p.m. Nothing good on TV.
Weeds and daffodils in back. Priced redwood boxes - high!
Bed, but ate bread and drank chicken soup. Woke in night with pains. Indigestion or bones?

* For this she wrote "Bf McD." I lengthened a lot of her shorthand.


Posted by Justine Frederiksen at 7:51 PM No comments: