When I couldn't get pregnant we adopted: A dog

One day on a hike I met a woman with a baby strapped to her chest. “Is your dog friendly?” she asked. “My daughter’s really into dogs right now.”
I said my dog was very friendly, but was still amazed when the woman leaned her baby’s head toward the dog, who eagerly reached up and licked the pink mound offered to her like an ice cream cone.

The woman and I both laughed as she lifted her child back up, but soon I felt a strong wave of sadness watching this happy young woman carrying what would soon become a happy little girl with her mother’s red hair.

I felt sad because while I had been that little girl, I would never be that woman.

Any chance of me becoming a mother likely died with my mother. Since at 15 I was forced to mother myself, any desire to mother anyone else evaporated. For decades whenever I saw women carrying babies, I never ached to be the mother, I ached to be the baby.

So when I finally decided I might want to be the mother, the desire likely came too late, because a baby never did. But when I finally put away the ovulation charts at 42, a few months later that dog decided I would mother her instead.

And she really needed mothering, because she was a 13-month-old dog who had never been taken for a walk or taught any manners. I know that because I watched her all those months in my neighbor’s yard, where most days she had nothing to do but watch me garden.

So she dug a hole under the fence to stick her head through and see me better. Soon I was talking to her all the time, greeting her by sticking my hand through another hole in the fence so she could lick it, and playing chase with her by running from one end of the fence to the other.

At night I’d sit at the fence and call to her. She would come and lie on her side, stick her leg through the hole and I’d hold her paw, telling her some day I’d take her for a walk.

But the week my husband came home with a leash we noticed she was no longer in the yard. I looked for her in the animal shelter and there she was, in the very last cage, after being found wandering in the hills several miles away. I wasn’t sure it was her at first because I had never seen her ears or even her whole head before. But she knew it was me immediately, jumping up and pawing through her cage to reach me.

When her owners didn't claim her, we adopted her and on Halloween night we could take her home. The next day I borrowed a crate so she could sleep in the house with the cats, and after seeking help from a dog trainer I quickly got her to stop jumping on me.

It took much longer, however, before the dog and the cats could be left alone together, even longer before I could walk her without her pulling on the leash, and even longer before anything left in the back yard would not be chewed to bits.

I don’t think she will ever learn to avoid skunks or to not run up to new dogs, despite one taking a chunk out of her side for being rude, but she knows the driving routes to and from our favorite parks so well that she will tap my shoulder with her nose if I make what she decides is a wrong turn. I spent more than 40 years being a devoted cat person, but few things now give me more joy than watching my dog running free, then sprinting back to me, her tongue flapping. 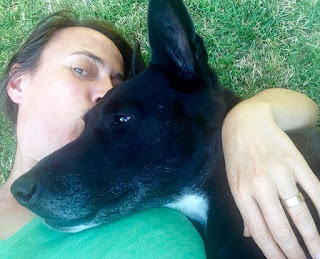 It's been nearly nine years since we brought home the dog, and sometimes I wonder if I should have adopted a human, too. But then I remember what my mother’s friend, who raised both human and four-legged daughters, told me: "Stick with the dog. She'll be more grateful."
And so I stick with my dog daughter, and sometimes when I hold her paw, I'm still grateful that it's no longer through a fence. And know she's grateful for that, too.
Posted by Justine Frederiksen at 10:26 AM No comments:

Email ThisBlogThis!Share to TwitterShare to FacebookShare to Pinterest
Labels: dog adoption story, my daughter is a dog, Never gonna be a mom, when I couldn't get pregnant we adopted: a dog
Newer Posts Older Posts Home
Subscribe to: Posts (Atom)