Teen learns the hard way that his mom was right. (And is nice to reporter documenting his lesson!)

I got a report one day that a car had driven into a house and dashed over to find instead that a teen’s Honda had rolled down the hill and onto his neighbors’ lawn after knocking over their mailbox.
“I guess my mom was right about always leaving the car in gear,” the boy told me soon after I arrived. 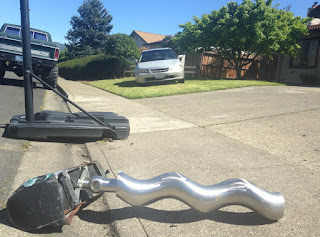 Not only because he quickly admitted that his habit of leaving the car in neutral to save him from having to pop it out of gear before he could start the engine was bad, but because he was so calm about a reporter arriving to document his embarrassing afternoon.
“I was just in the paper last week,” he said, explaining that his sports accomplishments had earned him the earlier attention. Maybe that positive coverage helped him accept my presence; whatever the reason, I definitely appreciated his willingness to talk to me.
Understandably, that’s not always the case when people’s lives are disrupted, particularly during much more traumatic events.
Another time, I was taking pictures of a home engulfed in flames while the resident stood crying in a friend’s embrace. When I asked the friend if either of them wanted to talk to me she stiffly declined, then after a pause added, “You know, I never understood why you guys never have more details about stuff like this. But I get it now.”
I appreciated her realizing that while many of us feel entitled to as many details as possible when things happen to other people, when those events happen to us, we usually want them to remain as private as possible.
I also appreciated her calmly asking me to give them privacy, which I did.
And although the teen whose car had rolled onto the neighbor’s lawn gave me his name, I decided not to print it and instead let his sports achievement dominate his press coverage.
As I turned to leave, he steeled himself for a conversation with someone he wanted to talk to even less than a reporter: his mother.
“This should be a fun one,” he said with a sheepish grin as he sat down in the car to dial his cell phone.
Tweet
Posted by Justine Frederiksen at 2:01 PM No comments: