You will never achieve happiness if you let others define it

A fresh high school graduate was talking to some middle-school kids recently about being a firefighter cadet and acknowledged that while some might recognize him from calls he responded to with the local fire department, they might also have seen him mopping and emptying trash cans. “Yes, I am the evening janitor here.”

I so admired him for saying that. Because while at his age I was also still in my hometown working a job that others might look down on while most of my classmates had gone off to college, I was nowhere near secure enough in my situation to point it out to a room full of twelve-year-olds.
But he was. While still in his teens, he already appears to know most of us struggle our whole adult lives to absorb – you shouldn’t let what others might think of you affect how you feel about yourself.
We all know how to be happy with ourselves from the start. But then we change. Usually right around the time we start school.
For me it was slumber parties, where I was trapped with girls from another planet who made it painfully clear that everything about me was wrong – the way I dressed, the way I acted and especially what I wanted to eat.
The hostess of my first slumber party wasn’t like that, however, and she started things off by bringing out a big bag of Starburst for us with a huge smile on her face. Since I wasn’t allowed to eat candy at home, I wanted nothing more than to return her huge grin and reach into that bag and pull out as many of those squares my hand could hold.
But the other girls all shook their heads and waved the bag away. And when the hostess offered it to me, I let their judgment fall on me like a net. I shook my head at the bag, her smile vanished and I looked down, both of us now miserable because I let those other girls decide what I should want.
I don’t remember anything else about that party, only how it felt to deny myself something and upset that sweet girl because of what some strangers would think. It seems too ridiculous to even fathom now.
But that scene played out again and again in the years to come, each time with stakes much higher than me not getting a handful of Starburst and a young girl not understanding why her guests didn’t want the candy she bought for them.
When I was the age of the fire cadet, I was working at a pizza place in my hometown to put myself through community college.
Most of the time I was pretty happy with myself. I was already living on my own and paying all my bills, something my classmates wouldn’t do for years, maybe decades. But when they came home during school breaks and I stood behind the counter from them in my sauce-stained apron, I let what (I imagined) they thought of me affect that satisfaction.
And my finally moving away didn’t solve that problem, because by the time I transferred to a four-year school most of my high school classmates had finished college and were on to the next stage. As proof, one of them showed up as the fresh-faced professor of one of my history classes.
I was mortified. And while a younger me would have dropped the class in shame, I remember deciding to not resent her accomplishments but appreciate them, and maybe learn something from those accomplishments.
And I’m glad I did, because she was a great teacher – the kind you get a lot from because they also expect a lot from you. She impressed me. And, funny enough, I managed to impress her, too.
Because at the end of the class she told the rest of the students that we had grown up together, and that she wanted to commend me for handling an uncomfortable situation with humility and grace.
I started the class proud of her, and ended it proud of myself as well. Because I knew I was learning what was really important – making yourself and the people who matter happy, and ignoring the people who don’t.
Oh, and when someone offers you Starburst, or something else you want to eat. just take it!
Posted by Justine Frederiksen at 4:28 PM No comments:

Email ThisBlogThis!Share to TwitterShare to FacebookShare to Pinterest
Labels: Stop comparing yourself to others to be happy

Hike through history on Mt. Konocti, where a tragic piece of Ukiah’s past still sits

A recent hike up Mt. Konocti offered the great exercise and stunning views of Clear Lake I was expecting. But it surprised me with fascinating glimpses into the past, including the former home of a determined widow and a tragic piece of Ukiah history I knew nothing about.

The Wright Peak Summit Trail is about three miles and begins after a short drive up a winding dirt road in Mt. Knocoti County Park near Kelseyville.
Sure, the trail is technically a fire road, but it does take you through an apple orchard and offer you bathrooms every mile or so, which I found to be a rare and most-welcome treat. There is no water available, however, and the trail gets very hot, so bring plenty to drink. 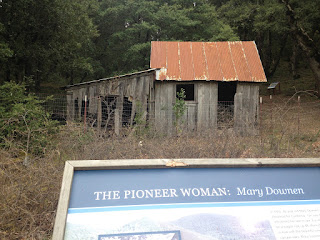 Most descriptions of the trail I found explain that a short side trip will take you to the home of Mary Downen, which is a cabin built in 1903 that the homesteader refused to leave even as an elderly widow.
According to the historical marker at the site, she didn’t want to live with her family in Lakeport, but every day at 2 p.m. she would walk to the side of the mountain and use a mirror to reflect the sun as a way to tell her daughter she was OK. When her daughter signaled back, Downen went back to her cabin.

But I knew nothing about the plane crash wreckage I found just before the summit.
According to the interpretive sign nearby, Mervin and Julia Enzler of Ukiah were flying home from Santa Rosa on Jan. 26, 1970, in their small plane when it crashed on the top of Wright Peak during bad weather.
The Enzlers were in their 60s and had recently retired as owners of the Model Bakery, which is now known as Schat’s Bakery in downtown Ukiah.
The wreckage of their white and turquoise 1946 Navion A is still there, lying just a few feet from the panel describing the crash, which was built and dedicated in June of 2016 in a ceremony attended by the Enzlers’ son Ed and his children.

A bit more of the site can be seen in this video: https://youtu.be/_jj6ekURcl0

Or read more about the crash and the trail here:


http://konoctitrails.com/enzler-plane-crash-panel-dedicated-on-mt-konocti/
Posted by Justine Frederiksen at 3:10 PM No comments: