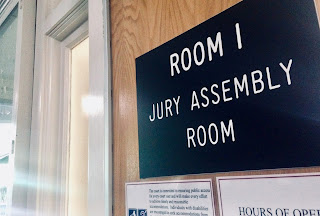 When I was picked recently to serve on a jury, I immediately felt trapped and panicky as  I realized I'd be spending the next several days in a stuffy courtroom full of strangers. Until I heard the voice of one of my fellow jurors describing how he felt getting his jury summons.


"It was one of the best days of my life," said the former prisoner, explaining that the letter was his official invitation back into society.

I had groaned when I got my summons. And I'm guessing most everyone else called in with me that week did, too.

But not the convict I will call John. To John, that letter meant he had successfully rehabilitated himself and reinstated his rights to vote and to serve on a jury.

He had waited years after his release from prison to apply for those rights. And once he did, "six months later I got that summons," John said, adding that he'd never been considered for a jury before because of a criminal past that began in his teens.

But while our fellow potential jurors did everything they could to show resentment toward law enforcement, often relaying second or third-hand accounts in the hopes of being excused from service, John said he had no hard feelings toward the people who administered his punishment.

"I know the bailiff there because he arrested me," John said of the handcuffs that had put him in prison for several years.

The first morning of the trial, I told John he had given me valuable perspective. Such as how sitting in comfortable chairs, being offered many breaks with the freedom to go outside and eat whatever we wanted during the day, then going home every night to our families and sleeping in our own beds was nowhere near like actually being in prison.

Except in one surprising way it was.

When I asked John if there was anything he missed about being in prison, he described a culture of mutual respect he had appreciated. On the outside, he quickly noticed, people often give no thought to others they pass, not even acknowledging the presence of, let alone holding a door open for, someone they will likely never see again.

But since prisoners are crammed together day after day as they eat, sleep, bathe and use toilets within inches of the same people over and over, they quickly learn that even the smallest act of respect will be remembered and reciprocated.

And I felt such careful respect in every action of our judge in the courtroom, starting with how he greeted us every morning, and excused us every afternoon, by sincerely thanking us for carving time out of our lives to serve on a jury.

The judge was so considerate, in fact, he had water put on a table for us to access any time we wanted, even adding his own cough drops and chocolates for us to enjoy. And when my service was completed, I got a letter from the judge personally thanking me one last time for my time and commitment.

That, too, was cool.
Update: Of course, this was written before the Covid-19 pandemic and therefore does not address the new layers of anxiety and risk now associated with certain aspects of jury duty. However, my appreciation for the perspective my fellow juror offered me has not changed.

Posted by Justine Frederiksen at 2:49 PM No comments: