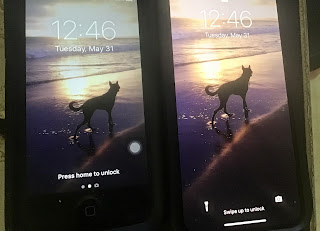 Something amazing happened when I went to get a new phone last year: I didn’t buy one, because instead of pressuring me to spend a bunch of money, the salesperson helped me keep my old phone running a bit longer.

Because I didn’t want a new phone. I still loved my old one, an iPhone 5 that works just fine, thank you very much. Fine, that is, until the “Home” key gave out, making the phone so frustrating to use that even I had to admit it was time to replace it.

Why so reluctant? Because I am no longer that girl who fell in love with the first Macintosh computer my father brought home in the 1980s. Back then I was a teenager, so I hopped on the newfangled Mouse like it was a magic carpet.

But four decades later, learning new technology no longer feels like soaring to new heights — it’s more like making a wrong turn out of your quiet neighborhood and onto a busy freeway, suddenly becoming a panicked tourist, lost and in the way.

Like in Chicago when I tried to buy a train pass at the station near my hotel. After many agonizing minutes of hogging a ticket machine to no avail, an employee finally appeared to explain I couldn’t buy what I needed there and pointed me to a drugstore across the huge, busy intersection.

Frantically memorizing all the street signs and praying I could get back to the train station once I got my ticket, I stepped off the curb. And when I bought the pass, found the station again and boarded the right train, I swelled with the pride of accomplishment as I looked out the window at the tall buildings of Chicago’s famous Loop, finally seeing in person what I had admired in movies and on television.

Moments like those are why we travel: We dive into the agony of the unknown because we know the ecstasy of resurfacing, now stronger and smarter than we were before.

But I’ve reached an age where I’m starting to fear I may never be any stronger or smarter than I am right now. And instead of swelling with pride when I regain control, I’m usually sweating from the knowledge that I barely escaped with most of my dignity intact, and that next time I will have even less to spare.

Like the morning in Montana I had a meltdown just trying to get breakfast. Hungry and frazzled, I spilled some of the greens I was collecting at a grocery store hot food bar and became so overwhelmed by the annoyed regulars surrounding me that I began to cry. Picking up as much of my mess as I could, I escaped to the yogurt aisle and pretended to study the labels for several minutes until I was ready to try again.

I finally did gather my food, but back in the car I was humiliated instead of happy, feeling weaker instead of stronger. This is learning new technology now: The agony of travel you didn’t choose, with no ecstasy reward afterward.

Because instead of teenage me riding the Macintosh magic carpet, I am now my mother, stuck in traffic and needing her teenager’s help at every turn. And even worse? I am that middle-aged woman without even an impatient daughter to help her navigate.

That’s why it was so cool when I first tried to get a new phone, I was helped by a young woman who was far more patient than my mother’s daughter ever was.

“Most people choose that plan,” she said, steering me away from the most expensive plan I was pointing at. Once the paperwork was done, she brought out my new phone and picked up my old phone to complete the transfer.

“Yeah, that doesn’t work anymore,” I said when she tried the Home key. “That’s why I’m here.”

But she had a magic wand. With a few swipes she put a “virtual home key” on the screen and quickly accessed anything she wanted. I was astounded. Is that really all I needed?

She handed me her tablet with my new contract, but I couldn’t sign. I just kept staring at my old phone, which now really did work just fine.

“Of course not,” she said, barely hesitating before accepting my wishes and deleting my contract.

“How much longer do you think this phone will last?” I said.

“Probably a long time,” she said. “It’s the Home key that usually gives out on those.”

“I guess a just needed a young person in my life,” I said, my cheeks flushed from both embarrassment and relief as I left without a new phone I didn’t want to buy, and without being chained to a three-year contract I didn’t want to sign.

Soon I learned just how kind that young lady was when I finally did get a new phone a few months later. To avoid signing a service contract, I did not return to the store where she worked and instead went to a large retailer I trusted where I could buy my phone outright.

Everything about the second salesperson there was the opposite of the first: She had pointed me to a cheaper plan, he pushed me again and again to the most expensive one. And whenever I asked questions, he bristled before giving me incomplete or false information.

When I asked if the phone would connect with my old laptop, he said it would, but it didn’t. He told me I needed to buy another power brick because the new phone didn’t come with one and I couldn’t charge it with my old cords. Not true: After buying a new power brick, I found that all my old cords worked just fine on my new phone.

Perhaps the worst lie he told was that he had spelled my name correctly. Knowing that so many people struggle to spell my Danish surname, I insisted he make sure he got it right on my email before my contract was completed. He reluctantly checked, then assured me he spelled it correctly.

But before even leaving the store, I got an alert on my new phone telling me that the email on my account had been changed. Thinking my account had already been hacked, I called customer service as soon as I got home and sat on hold for 30 minutes only to learn that the change was because the salesman had indeed spelled my name incorrectly. And instead of admitting it, he lied and changed it, prompting my frantic call to customer service.

Happy update: Now that I’ve regained most of my dignity, I am pleased to report that this old gal can still learn new tricks: Like how when taking a photo, if you keep your finger on the screen it will begin taking video automatically.

This feature is great if you’re taking a photo of a bird which suddenly starts flying, but I especially love it because I not only discovered it myself, but was able to teach it to a younger friend, a professional photographer who is usually showing me how to use my phone.

And he captured my proud moment on video:

Posted by Justine Frederiksen at 9:22 AM No comments:

My gratitude journal in college: “I’m grateful there was no video camera last night”

Right after I graduated college I started keeping a “gratitude journal,” writing down at the end of each day at least five things I was grateful for during this very exciting, but also very fraught, transition period in my life.

Not only because the journal helped me stay grounded at the time, but because I could find it now and enjoy reading the entries on a day when I really needed to be reminded of all the good things there are to be grateful for. And maybe even more, needed a good laugh!

1. I’m grateful for the beautiful and amazing view we saw atop Black Hill today, much better than Madonna Mountain.

3. I’m grateful for Andrews*, and how he and Berger make me laugh, and how he’s always happy to see me.

5. I’m grateful/glad for the feeling of water. That such a simple thing can feel so good.

6. I’m grateful for Texas-size margaritas for $3.50 at Hudson’s in flavors like watermelon, raspberry and kiwi, with big paper umbrellas that actually fold down.

1. I’m so f--king grateful that I didn’t have sex with Andrews; I’m grateful no clothes came off. I didn’t even touch him. Just kissing. I wish it hadn’t happened, but I’m grateful, that is all.

3. I’m grateful for showers, and the feeling of renewal afterward.

4. I’m grateful that I have my own room.

5. I’m grateful there was no video camera last night.

1. I’m grateful it was raining, so I didn’t walk by the journalism building today.

2. I’m grateful for the deliciousness of the potatoes and eggs I can make in the morning, they never cease to satisfy me.

3. I’m grateful for all the rain, because the green mountains are so beautiful. Breathtaking.

5. For strawberry preserves, and cheesecake to pour them over.

6. I’m grateful that tomorrow is another day, and I can try something new.

1. I’m grateful that I can cook, and I still have things like chicken and rice to make.

2. I’m grateful that I have a credit card, so I could buy toner for my printer.

4. I’m grateful that I’ve been to Paris, and London.

5. I’m grateful for reading, for being able to read delicious novels like The English Patient is the best, sincerest form of escape I know. It is the only thing that truly makes me feel human. Like I was a little girl again, where all that mattered was the bed was comfy, and the only thing that I wished for was that my mother would let me have milk instead of water. That was my burning question: “Why not?”
That was it, not this infernal noise in my head of late bills and not getting my degree and not finding a job and running out of money and watching too much TV and wanting a man who betrayed his girlfriend again and again and who would only end up betraying me yet I still can’t stop wanting him.
I just wanted to read “Starring Sally J. Freedman as herself” again and again and drink milk by my bedside. And get rid of those curtains. And make out with my teddy bear. I should have stuck with teddy bears.

*Not his real name.

Posted by Justine Frederiksen at 7:21 PM No comments:

Email ThisBlogThis!Share to TwitterShare to FacebookShare to Pinterest
Labels: Gratitude journal, life in college, the joy of books, the joy of reading