My favorite moment in Monterey: Meeting the man playing guitar in the harbor.

The last morning of a recent visit to Monterey, I met a man playing guitar in the harbor.

Everything about him was cool.

First was the music he was playing, which drew me closer because it reminded me of Jimi Hendrix.

Second cool thing was the banana on his pile of dollars to keep them from blowing away.

When I knelt to leave some of my dollars, he said the fruit was not only practical, but put out in honor of someone no longer in the harbor.

Last, but also best, was the infectious grin he offered to everyone who walked by. To those who met his eye he offered a friendly, “How’re you doing?” To those who asked how he was, he said, “Just loving life.”

That was very cool.

And he kept smiling even as we talked about how I could now only afford to visit the area I used to call home.

“That’s why I’m doing this,” he said, patting his guitar. “Three thousand dollars a month for rent!”

He went back to his music and I walked away with the best birthday gift I could have gotten that morning: A new resolve to “just love life,” whatever it brings.

My weekend in Monterey had many wonderful moments, but meeting that man in the harbor was definitely my favorite, because he reminded me that happiness is an attitude: No matter where you are or what is happening around you, if you look hard enough, you can find something cool to smile about.

And here in California, where everything I love seems to be evaporating before my eyes, finding a way to enjoy what is still here is more important than ever.

See him play and hear other music from my visit below:

Posted by Justine Frederiksen at 3:01 PM No comments:

There’s nothing like watching a newspaper being printed. And getting to yell, “Stop the presses!”

At my first newspaper job after college I was on the night news desk, where your shift didn’t end until you checked the first copies of the next day’s paper as they came off the printing press.

Of course, when I wanted to go home it wasn’t quite so cool to wait that extra half hour, often past midnight, for the huge printing press to finally start churning out a few newspapers so us last editorial folks in the building could make sure there weren’t any major errors to fix before thousands of papers were made.

But now I know how special it was to watch the press transform all the blood, sweat and tears of everyone in the building into a neat package I could hold in my hands. Those were moments of pride and wonder unlike any others.
For those moments, though, I had to brave another realm, one carefully separated from the newsroom by a claustrophobic hallway and a very heavy door that I was only supposed to open when the press wasn’t running. Even with the press quiet I found that room overwhelming: The size, the smells, the lights, and especially the faces of all the near-strangers anxious for me to leave without finding a reason for them to strip the press and start their work over.
But the worst thing I could do was barge in when the behemoth was at full blast, like I did the time I got to order, “Stop the presses!”

It was a Saturday afternoon and the first two sections of the Sunday paper were already being printed when I happened to check one of the pages my co-worker prepared and saw a mistake that had to be corrected. A crucial “r” was missing in the main feature’s headline, so it yelled: “beast cancer.”
I ran to the press room and flung open the heavy door. Most of the workers inside didn’t notice, as they all had thick ear protectors on and were busy getting the first run done so they could prepare for the next, but the supervisor looked at me when the door opened.
Knowing he couldn’t hear a darn thing even if I shouted at the top of my lungs, I just dragged my index finger across my throat, and he signaled to stop the press. As the machine ground to a halt I showed him the error to prove my demand was necessary, then hurried back to the newsroom, where my co-worker had already fixed the typo and started the many-step process of creating all new negatives and plates so the press could start again.
I will never forget the sights and sounds of that day, just as I will never forget what it was like to hold a freshly printed newspaper and smell the ink staining my fingers.
If there is a temple of journalism, it is the press room: A huge space that demands humility, inspiring prayers and pleas of forgiveness from those who enter. Even the notoriously robust ego of a journalist is easily shrunk when that massive machine shows just how small a part one person plays in putting out a newspaper.
And seeing all the time, energy and money it takes to create that roll of information, which will soon be dropped in thousands of driveways, it’s hard not to pray — Pray that you don’t find any mistakes to stop the press, but also that you do find the really bad ones.
Of course we humans can't catch all our mistakes, so we also ask for plenty of forgiveness in the press room, both for the minor typos and the major missteps. And while the finality of the press run can be terrifying, few end-of-shift rituals are as tangible and triumphant.
A few years later, that newspaper shut down its printing press to cut costs, and I haven’t gotten to watch another press run since, as every other newspaper I’ve worked at no longer had a press in the building to create their papers on site.
Seeing a press run is something I’ve sorely missed, not just because of how cool it is to watch one, but because that machine felt like the beating heart of the newspaper. When every day you’ve spent in an industry you’re told its dying, it’s very comforting to have that heart close by, where you can check on any time you want. If it’s far away all you can do is hope it’s still alive, ready to keep bringing the words you to love to life.
Posted by Justine Frederiksen at 9:29 AM 2 comments:

Email ThisBlogThis!Share to TwitterShare to FacebookShare to Pinterest
Labels: my first newspaper job, newspapers, print is not dead, printing press

Where does the wish go 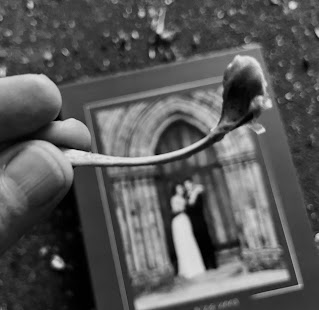 when nobody wins
the wishbone?

It is our future,
he said
so let’s both wish for it.
We wished
and we pulled,
but the top went flying
behind the fridge.

If we each got the same little piece,
did we each get our wish,
or did nobody?

In tiny notebooks, my grandmother wrote down each day when she woke, where she ate breakfast, any movie she went to see, noted any mail and calls, then what she read and watched on TV before bed.
In 1997, my grandmother turned 82 while living alone in a mobile home park in Santa Cruz, Calif. But I wouldn't describe her as lonely; she was an extremely independent and persnickety woman whom I never knew to live with another person or even a pet. (I wrote more about her life in an earlier post.)
In April of 1997, she was watching golf, checking the night sky for the Hale-Bopp comet, and preparing for yet another spring trip to Paris at age 81!
That was cool.
Tuesday, April 1, 1997
Up 8:30. Watered lawn.
To mall, looked for blue pants to match coat. None. Take shorts!
Drug Emporium, got TV Guide, Kleenex, Light Days.
Penney's, sale. Nothing for me.
TV: Frasier.
Bed, crossword.
Wednesday, April 2, 1997
Up 8. Watered flowers.
Wind up again.
To Vibol’s. Shouted at man with beard. Large man, belongs to astronomer’s club.
To show, “Devil's Own.” Fair, long. Noticed my car had ding!
To McDonald’s, got chicken sandwich.
(Power out: Loud explosion, all lights out about 15 mins.)
Thursday, April 3, 1997
Breakfast Kmart.
Got ginko, multi-vitamins.
To Gottschalk’s. Diarrhea. Bad.
Home, rested. Bad water.
Ate cereal, bananas.
To Gott’s, got blue pants, pearls.
Home, ate cottage cheese and pineapple.
Cancelled dinner at Live Oak.
Friday, April 4, 1997
Bed 1:45 a.m. Watched Lullaby of Broadway.
To Sears for vacuum repairs. No batteries available now.
Home. “In Name Only.” Cary Grant, Carole Lombard.
Longs, got envelopes.
Wendy’s, got chicken sandwich.
To show, “That Old Feeling.” Bette Midler. Enjoyable.
TV: JAG, Poirot.
Mail: Letter from Stinson, Yvonne.
Saturday, April 5, 1997 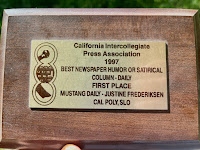