Please don't squeeze me. I only like hugging people I love. 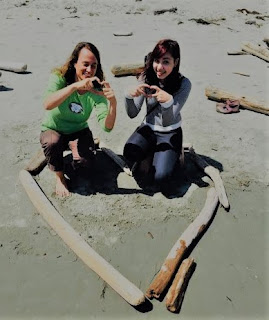 I recently watched a movie called "Please Stand By" about a young autistic woman who doesn't like eye contact or hugs. And while her caretaker gently forces her to practice maintaining eye contact, she doesn't force hugs. Instead, the pair greet with an air hug, facing each other with their arms wrapped around an imaginary person as their fingers slightly touch.

I'm not sure where I am on the "autism spectrum," but I do know I don't like hugging most people. Only loved ones.
And while I don't want to start air hugging instead, I have tried to start a gentle fist bump for more casual interactions. Say, friends I see often and like very much, but don't want to hug every time I see them.
However, when my husband (only half-jokingly) asked if we could stopping hugging, I told him no, explaining with a modified quote from the movie Sweet Home Alabama, "I married you so I can hug you any time I want to."
For the rest of us, I propose we all greet one another how a teacher I saw in a video greets her kindergartners: as they walk in the door they each pick a hug, a high-five or a happy dance with no contact at all.
The code could be this: hold up one finger for a hug, two fingers for a high-five, and three fingers for a dance.
I'd always choose a dance, by the way. How could you not be smiling all day long if you greeted everyone with a happy dance?
Posted by Justine Frederiksen at 9:27 PM No comments:

Suzie was always telling Oliver what to do. So when he asked her how many berries they needed to pick and she didn’t answer him, he knew something was wrong.

“Um, Suzie? Did you hear me?” He peeked over the bushes in front of him, but she wasn’t there. So he headed back down the path along the blackberry bushes until he found her standing in front of one. “Suzie? How much does your dad wan—?”
He froze when the bush began shaking violently and out crawled a man. Or at least he hoped it was a man. He was covered in so many berry vines, leaves and smashed fruit he might have been part of the bushes – except he was talking. “Ooo uuu ath nny thuckers?” he said, berries tumbling out of his mouth and his entire face covered in deep red juice.

Neither kid moved nor made a sound. Suzie was too focused on trying to understand what the stranger was saying to do anything else. Oliver just wanted to keep her in front of him.
More agitated now, the man stepped forward and grabbed Suzie’s shoulders, his voice much louder and clearer since most of the berries had oozed down his face. “Do you have any zuckers!?”
“Any what?” Suzie said, still rooted to her spot even with the stranger’s hands squeezing her. If this was the last conversation she was going to have, she wanted to know what it had been about.
Oliver inched closer to Suzie’s back, praying the man couldn’t see him moving.
“Zuckers! I need zuckers!”
“What – what are zuckers?” Suzie said, feeling braver since she guessed if the man were going to hurt her, he would have already.
The man let go of Suzie and sighed, wiping a hand across his face. Smelling the juice on his fingers, the man shoved them in his mouth greedily and took his eyes off Suzie. At that moment, she felt a tug on her shirt and her body moving back.
“Let’s go. Run!” said Oliver, taking off with her shirt clutched in his hand. As they dashed off, the man did not even look up from his fingers.

The children ran out of the bushes toward Suzie’s house as fast as they could, taking their shortcut through the strawberries that always made Suzie’s father mad. When they finally reached the house and burst inside, her father came out of the kitchen, seeing them doubled over and panting in the living room.
“What’s going on?” he said, holding a bowl he expected to fill with berries.
“A man attacked Suzie!” Oliver wheezed.
“What?!” Her father dropped the bowl on the dining room table as he hurried toward them, grabbing Suzie’s shoulders and lifting her upright.
“What is that?!” he said, sounding almost as panicked as Oliver when he saw the red stains covering Suzie’s shirt.
“Oh – I’m fine. That’s just berries,” she said, wrapping her arms around her dad’s waist.
He patted her once, then pushed her backward. “What happened? Who was this man?”
Oliver sat down on the couch, lowering his head quickly toward his lap to make sure he hadn’t peed his pants. Seeing he was dry, he locked his knees together and wrapped his arms around them just in case.
“I don’t know,” Suzie was saying. “He wasn’t mean, I don’t think. He just really wanted something called a ‘zucker.’ He kept asking for zuckers.”
“Oh. God. Oh, no,” her father said, turning away with his hand on his forehead.
“What? You know what he’s talking about?” said Suzie, shocked.
Oliver looked up from his knees. Suzie waited impatiently.


“Well,” her father said, sighing and sitting down on the coffee table, which he only did when very rattled. “Did I ever tell you about the other island?”

Posted by Justine Frederiksen at 10:08 AM No comments: