I turned down my first newspaper job and almost didn’t meet my husband. But luckily “Mr. Wrong” steered me to “Mr. Right.” 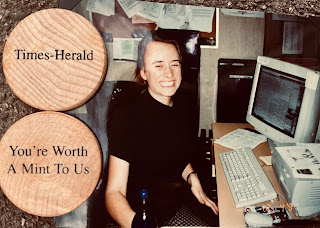 A month after graduating college, I had gone on three interviews and received one job offer. But the newspaper wanting to hire me was not the one I wanted to work at, so I declined the offer, sure another was coming. Once it clearly wasn’t, I gathered all my courage to call back the man who offered me the job, hoping it was still available and he still wanted to hire me. It was, and he did.

Cool not only because that job began my career in the business I have loved for nearly 30 years, but because the man who became my husband was working at that newspaper, and we never would have met if I hadn’t called back about the position they offered me.

And who convinced me I should? The man I was seeing at the time, a man I’ll just call “Mr. Wrong.” Wrong because I shouldn’t have been seeing him, and he certainly shouldn’t have been seeing me. Because he already had someone at the center of his life, only offering me a few hurried encounters scattered over one agonizing year, a year I spent hunkered like a fisherman on the ice, waiting for a pull on my line.

See, I hadn’t just declined the offer, I had lied. Instead of simply turning down the job, I claimed I had gotten hired at another newspaper, thinking that would release me without any hurt feelings. But of course my lie just made everything worse, as lying usually does.

While I waited for my invented job to become real, my roommate got hired and moved away with her furniture. For weeks after I sat on the living room floor next to a phone that never rang, my lie keeping me from using it to call that first newspaper back.

And my shame keeping me from telling anyone what I had had done (not even the roommate who was the only other person who knew about Mr. Wrong), until finally I confessed my sorry situation to Mr. Wrong, probably because all the shameful stuff we did together made me willing to admit another bad deed.

Which turned out to be a very good decision, because Mr. Wrong had enough life experience to know what I should do next, and cared enough about my future to tell me to do it.

“You have to call that paper back. It’s a job offer. You don’t know when you’ll get another one.”

So I did. And I got the job. But I didn’t tell the whole truth at first. That came a bit later when I felt more comfortable with my supervisor. And though he likely already knew, he was kind enough to act like he didn’t, and to say I was forgiven.

All that happened twenty-five years ago this month, and I couldn’t be more grateful that I called back for that job. And that Mr. Wrong told me to.

Of course, he’s not the only person who would have given me that advice. But he was the only person I gave the opportunity to do so. And he could have just laughed at my stupidity, but he decided to help. 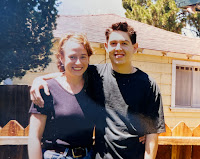 And because of that I met not only the center of my current family, the man I’ve shared all my shames and successes with for the past 25 years, but my first newspaper family, as well.

Posted by Justine Frederiksen at 12:21 PM

Email ThisBlogThis!Share to TwitterShare to FacebookShare to Pinterest
Labels: how I met my spouse, lesson about lying, life lessons, my first newspaper job